A Brief History of the Good Shepherd Mission

Our team is made up entirely of volunteers and these volunteers cover 100% of the costs – so 100% of your donation goes directly to Good Shepherd Mission in Puttur, India. We advocate for those who need our help. Even a little help goes a long way.

A Promise Made: The Beginning

In 1979, Brother Henry Bhasker and his wife, Viola, were both schoolteachers in the public school system in Puttur, India. Early in that year, they were involved in a near fatal automobile accident. While both were seriously injured, Viola suffered the more severe injuries, and her survival was very much in question. Both Henry and Viola are third generation Christians, and both of them have a very strong faith. Henry prayed for Viola’s recovery, and made a promise to God that if Viola would survive her injuries and recover, he and Viola would begin a mission in the name of Jesus Christ. Viola did recover, and shortly thereafter Henry and Viola took into their home two orphans from the village of Puttur. Thus began the Good Shepherd Mission, a facility which was destined to grow and prosper and become a real force for good in the name of Jesus Christ.

The Bhaskers soon outgrew their humble-sized home, and rented an old building just outside the village of Puttur. They moved their home to this building and began to care for more orphans who needed their help. Having the vision and foresight to grow their outreach, they purchased a small piece of land adjacent to the rented building.

In 1990, Dr. Charlie Wolfe, a dentist who was a member of Calvary United Methodist Church in Mohnton, PA, traveled through Puttur, India with a group of medical/dental evangelists from New York City. One of the members of the team became ill while traveling from Hyderabad to Bangalore. The leader of the group knew of a small mission nearby which would be able to provide refuge so the sick member of the team could rest and recuperate. Brother Henry welcomed the group, and the sick young lady was given a bed to rest. The group remained in Puttur for the next day and participated in an outdoor evangelism service sponsored by the Good Shepherd Mission.

Dr. Wolfe was greatly impressed by the manner in which the mission was helping the poor villagers of Puttur. He witnessed a selfless couple giving everything they had to serve the poor and needy. There was no pretense or self-adulation visible in Henry and Viola Bhasker. After speaking with the Bhaskers, Dr. Wolfe learned of their aspirations and dreams for the Good Shepherd mission. Their primary purpose was to spread the love of Jesus Christ, and they understood so well that it was necessary to show His love in action.

When Dr. Wolfe returned to Mohnton, he spoke to church leaders about his experiences with the Bhaskers . The leaders were excited to help the Good Shepherd Mission build its first structure, the Good Shepherd Eye Hospital. This building, completed in 1993, allowed the mission to move its free cataract clinics for the poor from the old, rented mission building, which was unsatisfactory, to the new hospital. Since the establishment of the new Eye Hospital, the mission has done over 6,000 free eye operations for the poor.

Here are a few of the services we provide to those in need through the GSM Foundation in Puttur, India.

Need for a New Hospital

During a visit to the mission in January, 2000, a group from Calvary Church paid a visit to the local Puttur Free Government Hospital, the only hospital which will serve the poor in an area with a population base of over five million! The group had heard stories about this hospital and wanted to see for themselves just how medical care was dispersed to the poor.

The tour of the facility was an eye-opener! It was clear that cleanliness was not a concern for the hospital staff. Even the operating room was full of dangerous filth, with supposedly sterile gauze sponges bundled together on the floor of the anteroom, with antibiotics being diluted with water to stretch the supply, and disposable plastic syringes with the needles still attached being boiled in a tiny sterilizer so they could be reused.

The stench in the wardrooms was almost overpowering. The low-point of the tour, however, was the “birthing rooms.” These were tiny concrete cubicles with a thick stone slab being used as the delivery table. At the bottom of the slab was a dirty, rusty metal bucket to catch the fluids. It reminded the group of a scene from medieval Europe. Several of the ladies left the room in tears, finding the circumstances difficult to believe.

When the group returned to Mohnton, serious discussions began about the possibility of building a small but modern and clean mission hospital for the poor. They asked Brother Henry to develop some plans and cost-estimates, and the group was amazed to learn that a 20-bed modern hospital could be built and equipped for the cost of only $244,000.00, the price of a nice home in America. Thus, the project of funding a new hospital was born. 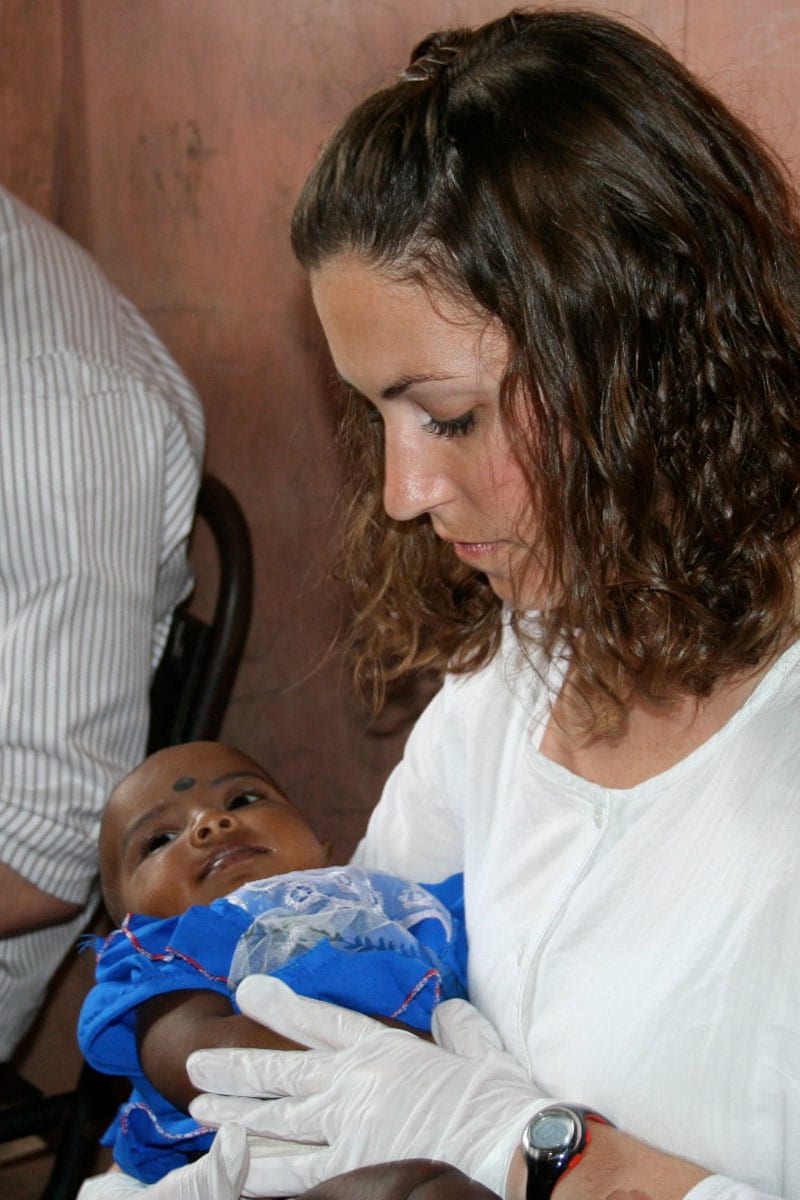 In January, 2001, the ground-breaking for the new hospital took place with many members and friends of Calvary Church in attendance and several participating in the event. In January 2004, the dedication of the completed hospital took place, with government dignitaries giving dedicatory speeches, a military band supplying the music, and once again with hospital supporters and fund-raisers from the USA sharing in the festivities. It was a grand and glorious occasion for everyone. The Good Shepherd Mission cooks supplied food for almost 800 people on the day of the dedication!

And what a beautiful hospital it is! With marble walls (marble is cheaper and more accessible than wood in India!), beautiful operating and treatment rooms, a small pharmacy, a nice waiting area, and a 20-bed recovery area. By the time the building was completed, it was fully funded. The first day the hospital opened for business, the line of those desiring treatment stretched from the hospital waiting area out to the street adjacent to the hospital. Many babies have been born in the beautiful, clean delivery area, which brings joy to everyone. On the other hand, the rise in the treatment of AIDS patients serves as a reminder that India is facing a difficult future with this dreaded virus and thus, Brother Henry’s next dream!

In 2009, the ground was broken for the HIV/AIDS Center located about 1 mile from GSM. The Center is the shape of the letter U—4 cottages on either side (each cottage can house 4 people) with the connecting section to house the administrative office, living quarters for the administrator, kitchen, and the Jesus Room. The center area is one large prayer garden with a statue of Jesus healing the crippled. There is some land in the back for growing vegetables. The place is truly beautiful and serene for those inflicted with Aids or TB to live their lives with dignity. (HIV patients are not allowed in hospitals in India and once contracted, the individual is thrown out of their village). Dedication of 3 cottages and the Jesus room occurred January 2010 when the Team of 10 led by Calvary UMC visited GSM.

100% of Your Donation Goes to GSM in Puttur, India!

Get in Touch. Get Involved.

All costs for the foundation are paid for by the Foundation’s Board Members. Do you want to support us by helping with our work? Please donate to our mission. 100% of your donation goes for the efforts in India. A helping hand is always greatly appreciated!